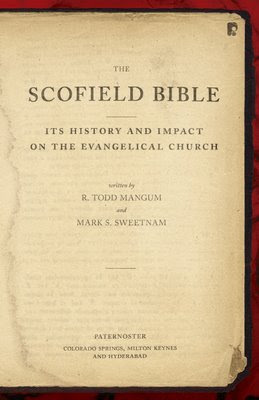 Just like marmite the Scofield Bible is something that you either love or hate. First published 100 years ago in 1909 it was a major factor in the spread of dispensationalism. It has sold millions upon millions of copies and has literally changed the face of Christianity for better and/or for worse. It was also the world's first study Bible. So love it or hate it, nobody can deny its significance.

Whether you are a fan or a cultured despiser (and I confess that I tend towards the latter camp) you will be interested in this forthcoming volume which tells the controverisal tale of Cyrus Scofield and the story of his reference Bible's impact over its first 100 years. The authors are both historians - one based in the USA and one in the UK so that the transatlantic flavour of the narrative can flood out. They tell the tale in a fair and balanced way so don't expect the book to feed your prejudices one way or t'other. But I have to say that I honestly found it a fascinating tale.

It is due out in the UK in Jan 2010 (just missing the anniversary). A good late Christmas present for dad or mum?

Michael F. Bird said…
Robin, I remember one year at SBL I saw Stan Porter buying a Scofield Bible. I looked at him in disbelief and said: "Stan, what the hell are you buying that for?" He said: "It's good for reception-history".
25 October 2009 at 11:15

Matthew Celestine said…
I think the overuse of the Scofield Bible was the biggest failing of the dispensationalist movement. Hence, it gets talked about so much by every author on the subject.

The problem with the Scofield Bible is that it says a lot about what the author believed the biblicasl texts mean, but absolutely nothing about the methodology by which he came to those conclusions.