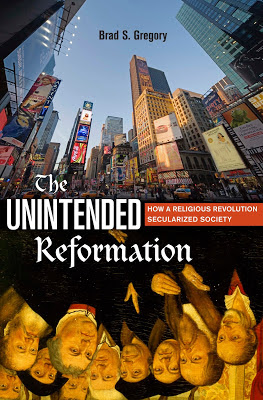 I am currently reading a really fascinating book. In a nutshell what Brad Gregory is arguing is that the Protestant Reformation played a pivotal role on the journey of Western societies towards


A hyperpluralism of religious and secular beliefs
An absence of any substantive common good
The triumph of capitalism and its driver, consumerism

The secular world we live in today is the unintended eventual result of the train of events set in play by the Reformation. None of this was what the Reformers had in mind — indeed, they would turn in their graves if they could see the longterm consequences of what they did. Nevertheless, he argues, the Reformation shaped the world we now live in in ways far deeper than many have realized.

It is a pretty controversial book, as you can imagine. I have no doubts that it will bring joy to a fair few Catholics and enrage Protestants. However, the basic argument seems rather plausible so far (I am about half way through). I have long suspected that the Reformation did play an important role in the rise of secularism but this book makes a far more detailed and eloquent case for that vague instinct.

The author, Brad S. Gregory, is the Dorothy G. Griffin Associate Professor of Early Modern European History at the University of Notre Dame.

Highly recommended, even if you don't agree with it all.

Kevin Davis said…
This argument has been around for quite a while. Chesterton and Belloc made very similar observations throughout their careers. On a more academic level, Ernst Troelsch and a host of "history of religion" folks in Germany were making the same arguments. Likewise, the Radical Orthodoxy scholars (Milbank and friends) make the exact same point, with lots of polemic. On a more pedestrian level, you can check-out a number of "traditionalist" Catholic websites and find the same thesis.

I'm sure that Brad Gregory brings new insights and new angles, but Protestant-->Enlightenment-->Secular-Pluralism has been duly noted in the past.
7 December 2012 at 17:59

Indeed. I am aware of others who have put forward the thesis before — esp. sociologists interested in secularization. (And I have a soft spot for Radical Orthodoxy.)

Where this book seems to differ is in offering more substantive support for the idea — lots more detail. Plus, it is really well written. Well worth the money.
7 December 2012 at 18:09

Anonymous said…
The essay and associated footnotes featured here gives a congruent confirmation of the thesis put forward by Brad Gregory - and even more so.