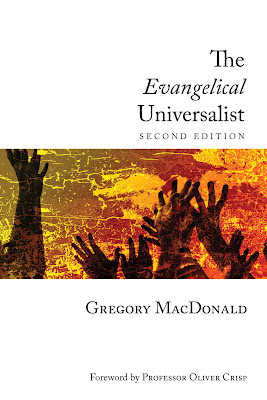 The second edition of The Evangelical Universalist in now available in North America on the Cascade Books website. It will appear on amazon.com within the next few weeks.

The UK edition will be out in a few weeks. I do not yet know the precise date.

There will also be a kindle edition in North America and Europe (well, everywhere actually).

1. a foreword by Oliver Crisp
2. a preface explaining how the book came about and the reaction to it.
3. a new appendix on Rob Bell's take on universalism
4. A new appendix responding to some of my critics
5. a new appendix on the biblical theology of election
6. a new appendix on what appears to me to be a paradox (contradiction?) at the heart of Calvinist spirituality
7. a study guide
8. a Scripture index

So it is quite a lot longer than the first edition

Randy said…
Exciting! I've very much been looking forward to the 2nd edition. I'm going to wait until its out on Kindle because I'm trying to limit my physical book purchases when I able to get Kindle versions. Less to ship back to the States!

I'm looking forward to reading your additions. I'm sure this edition will be a great benefit to clear thinking, as was the first.
23 May 2012 at 22:33

Anonymous said…
Bought the first edition Kindle version yesterday without knowing there was a second edition available at the same time.
15 July 2012 at 09:00

Bummer! I am trying to get amazon to take the first edition off.

jflyhigh6 said…
there's some more information, i see, i've read the first book, interesting take on the philosophy of molinism applied toward molinism, i've read some books on molinism, seems like a weak case to me, there are some contingents in the Bible so there's a little support there, i'm not sure why this new edition has rob bell take on universalism, i didn't mind (most) of hhid book velvet elvis and i enjoyed most of sex God, but rob bell when i read him doesn't seem to be a Biblical infallibility person so his take on universalism it's skewed from his presupposition, NOT SAYING molinism is a complete joke but william craigs view of transworld damnation is, i think universalism uses too much philosophy and Colosiians says beware of it
4 October 2012 at 18:57