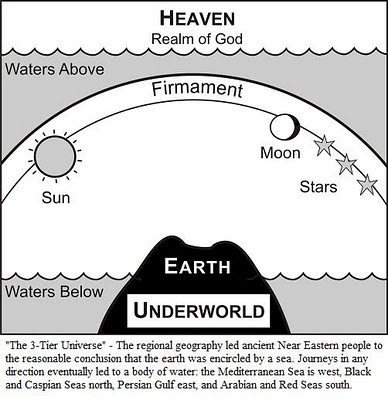 
2. "The Firmament and the Waters Above, Part II: The Meaning of 'The Water Aove the Firmament' in Gen 1:6–8." The Westminster Theological Journal 54 (1992) 32ff. (www.thedivinecouncil.com/seelypt2.pdf)

Seely comes from a Reformed evangelical background but, in these articles, he is reacting against creation science attempts to read modern scientific cosmology from the Bible. He demonstrates convincingly that the biblical authors presupposed an ancient cosmology and not a modern one.

Seely's goal is to read the cosmology of Genesis 1 in its ancient historical context.

In the first article he argues that the "firmament" (raqia') in Gen 1:6–8 is not the atmosphere but the sky conceived of as a solid dome over the earth. He shows both from the ancient world conceptual background and from the exegesis of the text that the sky was thought of as solid. He blows alternative views out of the water. To my mind his case is a slam dunk.

In the second article, he argues that the waters above the firmament are not rain clouds but rather a vast cosmic ocean that was believed to be on the other side of the "firmament" (i.e., beyond the sun, moon, and stars). In the beginning there was one vast cosmic ocean but God divided it in half—half is what we know of as the sea (but see later) and the other half is above the firmament. Again—his case is, in my estimation, a knock down case.

The third article argues
(a) that the "earth" in Genesis 1 was thought of not as a globe but as a flat disk.
(b) that this single-continent "disc world" is surrounded by and sits upon a vast primal ocean (the other half of which is thought of as above the firmament.

Now clearly such a cosmology is scientifically incorrect. Even the most fundamentalist among us do not believe that:
- the earth is a flat disk
- the sky is solid
- there is an ocean above the solid sky (beyond the sun, moon, and stars)
- that there is a primal ocean of water under the solid land we live upon
And, if we expanded the OT cosmic geography we'd discover other things that we no longer literally believe but which OT authors did (e.g., that the dead descend into sheol literally under the ground, that heaven is literally up beyond the waters above the firmament, etc.)

All this raises issues for the notion of biblical inspiration and it is no wonder that many evangelicals try to get out of them by arguing (unsuccessfully in my view) that this biblical language is simply metaphorical or phenomenological (describing how things appear rather than how they actually are).

Now Seely's own view is that God spoke through biblical writers but accomodated himself to their worldviews. So God revealed certain truths about creation to ancient people but he did so in terms of the way in which they conceived the cosmos. For instance, God revealed to them that it was Yhwh, the one God of Israel, who made everything (not the gods of paganism). God was not interested in communicating astronomy, geology, biology, cosmology, to Israel so he simply communicated truths (which remain true) in terms of ancient science.

I think that there is much truth in this approach. However, it is in danger of reductionism. The danger is that we say that God revealed himself to Israel in spite of their faulty cosmology. Our job is to strip off the ancient science and distill the pure revelation which we still affirm.

Ancient cosmologies were very much to do with the meaning, purpose, and function of the cosmos. Their ways of thinking of the universe saw it as "enchanted" and meaning-full. I tentatively suggest that God is actually affirming the meanings embedded in their naive cosmology. Thus whilst we cannot affirm biblical cosmology at a scientific level we can affirm it at the level of meaning.

To take one example. Biblical writers saw the earth as literally at the centre of the cosmos. In terms of science, this is simply mistaken (although perfectly sensible as a common-sense description of the world as we actually see it). However, the mythic cosmology may still be held to be correct in affirming the centrality of earth in the divine purposes (and many of the current debates on the fine tuning of the universe are contemporary ways of affirming something similar in a post-Copernican cosmos). The biblical cosmology is not to be thrown out but is a means by which God can reshape the way that we see the cosmos. I think that there are all sorts of things like this that we can learn from biblical cosmologies even though we don't take them scientifically.

I am suggesting that our job as Bible readers is not to say what the apostles and prophets said (that would require us to join the flat earth society). Rather, echoing Barth, we must say what we must say in light of what the apostles and prophets said. We must not simply cast aside ther husk of biblical cosmologies but rather learn from them how to reenchant the cosmos and how to inhabit "our" cosmos biblically.

Matthew Celestine said…
It's remarkable how many literalist commentaries on Genesis 1 ignore the plain text which says that the sun and stars are in the firmament, below the waters above.

I have come across a few more consistent literalist writers who hold that the waters above are a gulf of water far beyond the stars that separates our universe from God's heaven. I think Henry Morris tries to make out that there are two firmaments in the chapter, which is nonsense.

Edwardtbabinski said…
Hi Robin, Glad to see Seely continues to influence his fellow Evangelicals, but Catholics have accepted such data as well.

I would add that the flat earth cosmos is but one of many ancient Near Eastern ideas found in the Bible and its view of "god." Please see my article, "The Cosmology of the Bible" in the book, The Christian Delusion.

1) If the ancients assumed a flat earth, one must consider what other assumptions the ancients held throughout the ancient Near East including Israel, that may have been faulty. Divine kingships and divinely led nations? Animal sacrifice? Circumcision? Having their temples face east, with different degrees of holiness in each temple? The whole idea of an anthropomorphic god with jealousy, anger, seeking to fill his nostrils with the "soothing aroma" of burnt animals?

2) You seem to assume that the earth remains "central." But does it? We don't know. The cosmos is vast indeed.

“A NEW HEAVEN?”
EVEN FOR PEOPLE LIVING IN DISTANT GALAXIES?
According to the book of Revelation a “new earth” and a “new heaven” will be created after Jesus returns. Occupants of other planets throughout the hundred billion galaxies of our present “heaven” will no doubt be surprised to receive such an unearned favor, all because of what happens on our little world. Or is this simply another example of how the Hebrews viewed the earth as the flat firm foundation of creation with the heavens above created simply for the earth below?

Though it is not a direct article of the Christian faith that the planet we inhabit is the only inhabited one in the cosmos, yet it is so worked up from what is called the Mosaic account of creation, the story of Eve and the forbidden fruit, and the counterpart of that story, the death of the Son of God--that to believe otherwise renders the Christian system of faith at once little and ridiculous, and scatters it in the mind like feathers in the air.

So long as people believed, as St. Paul himself did, in one week of creation and a past of 4,000 years--so long as people thought the stars were satellites of the earth and that animals were there to serve man--there was no difficulty in believing that a single man could have ruined everything, and that another man had saved everything.

Did Jesus die uniquely to save the sins of human beings on planet Earth, or is he being strung up somewhere in the universe on every Friday?

DaveyT said…
I am a flat earth believer so I hope by saying so up front you don't remove my comment.

To say that God is accommodating the worldview of the scientifically naive is the same thing as saying the Bible is errant. In my opinion, you are on dangerous ground.

I do appreciate the fact that Paul Seely as well as other known authors such as Michael Heiser do agree that the Bible is a flat earth book. That, in itself is a major hurdle in a Christian's search for truth.

I honestly think that if you can make it that far, then you need to research the gaping contradictions between what scientism tells us verses what we can actually investigate ourselves (lack of curvature).

There also needs to be much more scrutiny upon NASA. The proof of their fakery is there if someone wants to find it. The origins of NASA are suspect as well. The timing of its origin with regards to admiral Richard Byrd, operation deep freeze, high jump and fish bowl which was part of a larger operation called Dominic. All leading to the establishment of the Antarctic treaty.

Here is a question for you:
In Revelation 6:12-13: Is John speaking metaphorically or literally?
Is this just another example of accommodation?

Consider the times we live in. Yes, a conspiracy of this size and magnitude is possible when you especially read Psalm 2 How close are we?

Thank you for allowing this comment to be posted.

jesse_a_b said…
I would like to point out that this
"The basic historical fact that defines the meaning of raqiac in Genesis 1 is simply this: all peoples in the ancient world thought of the sky as solid. "

Implies that you don't believe Genesis was inspired, but you believe Moses simply stole ideas from other people around at the time.
9 February 2020 at 00:33