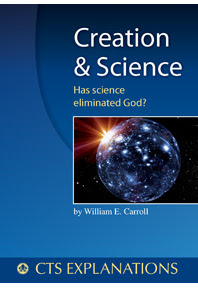 I have just read a great little booklet published by the Catholic Truth Society. It is called Creation and Science: Has Science Eliminated God? by William E. Carroll. Its author is the Aquinas Fellow in Theology and Science at Blackfriars, Oxford.

In a few short pages Carroll introduces non-specialist readers to some of the contemporary "problems" in science and theology and then shows how most of them are based on a basic misunderstanding of what it means to say that the universe is created by God. A few basic clarifications from Thomas Aquinas and "BAM" — a whole host of pseudo-problems disappear in a flash.

The book opens and closes with Stephen Hawkins' recent claims that we don't need God to explain how the universe started. Carroll shows that the doctrine of creation is not a claim about how things began but a claim that the universe absolutely depends for its existence upon God. But, as Aquinas showed a long time ago, this claim is completely compatible with even the claim that the universe has always existed (if such a claim is coherent). Let's suppose that there has always been a universe and that it never "began" — even then it could only exist at any moment in time because God is causing it to. If God had never willed the universe it would never have existed and it exists for whatever duration (short, long, or everlasting) God wills.

The book also introduces the very basic but oft-forgotten distinction between primary causation and secondary causation. Many atheists and believers alike make the wrong assumption that if we speak of divine action we must be thinking of God as simply one cause among many in the universe. Thus scientific explanations are set in competition with divine explanations. But this is a confusion. Divine causation works at a completely different level from secondary causation and science only examines the latter (metaphysics falls outside the boundaries of science). There simply ain't any conflict, says Carroll.

A little look at the issues of evolution and contemporary physics and the origins of the universe serve to show how theology and science work perfectly well together non-confrontationally. Problems only arise when people try to expand the ability of science to explain things into a theory of everything (which it is not and when we try to make it such we end up buggering up a lot of stuff, including science) or when people confuse theological explanations as pseudo-scientific statements (which they are not and when we take them as such we end up creating a lot of confusion and fearing science).

Anyway, it is only a little booklet aimed at non-specialists but it is by far the most helpful little booklet on science and religion I have come across.

Alex Smith said…
Thanks Robin, sounds very helpful, I will see if it's available at my local Catholic bookshop, otherwise I'll order it from Richard - thanks for the link :)
25 April 2012 at 23:11