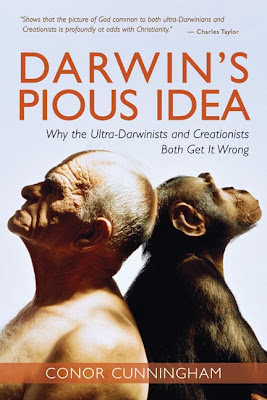 I have recently finished reading Conor Cunningham's book Darwin's Pious Idea: Why the Ultra-Darwinists and Creationists Both Get It Wrong (Eerdmans, 2010).

The book displays a deeply impressive breadth and depth of knowledge in the fields of biology, philosophy (both ancient and modern, continental and analytic), and theology. The result is a critique of Dawkins and Dennett et al. like few (any?) others available.

Ultra-Darwinism (the view that makes Darwinism into a theory of everything) is hauled across the coals for being intellectually vacuous and as self-defeating. It is, argues Cunningham, out of touch with the latest work in biology and is philosophically crazy! If per impossible it is true then we can wave goodbye to religion (which is the basic goal of ultra-Darwinism) but also to persons (that's right, "you" do not exist), ethics, art, reason, and science itself (including Darwinism). So ultra-Darwinism is either false (in which case it is irrational to believe it) or, if it is true, irrational to believe (because if it is true we cannot trust our reason to give us true beliefs). Either way it is irrational to believe. (You'll have to read the book to see the argumentation behind this bold claim.)

And, of course, if (impossibly) this view is correct and there are no persons and no right and wrong (which Cunningham argues that this view entails) then if people come to believe it and to live consistently in the light of the belief then that is very bad news indeed.

But Cunningham is no anti-evolutionist. On the contrary, his constant complaint against Dawkins et al. is that they do not take evolution seriously enough. Cunningham thinks that evolutionism is a problem (he has no time for "selfish genes", "memes", or for the attempt to make science into first philosophy) but he is convinced that human beings are evolved creatures.

Creationists get less attention but are taken to task for verging on heresy and atheism (!!!) — a modern aberration on the landscape of Christianity. Cunningham's own theology of creation seeks to root itself in the patristic interpretation of Genesis (a radical christo-centric reading). The urge to interpret Genesis 1–3 as literal history is both silly, out of synch with the tradition (he claims), and theologically misleading.

What we are offered is a Radical Orthodox perspective on an issue of current debate that is perhaps the most intellectually rigorous engagement with the New Atheists that I have yet encountered. All the more interesting for its sympathy with Christian Platonism and Thomas Aquinas.

I was not persuaded by everything but this book just sizzles with stimulating material. You cannot read it and ignore it. Not least because Cunningham's writing style is polemical and funny — he is a master of put-downs — but also because he has a very strong case against philosophical materialism and ultra-Darwinism.

I recently read an ignorant editorial in a British newspaper that made the comment that what Bishops in the Church of England have failed to realize is that all the intellectual arguments are with the atheists. This book absolutely blows that claim out of the water. The ball is now very much in the New Atheists' camp. Until they have some good answers to these penetrating criticisms (most of which I have not even mentioned in this brief comment) then they cannot claim to represent the voice of reason or of science. And I must confess that I find it very hard to imagine that they can defuse the intellectual hand grenade that Cunningham has lobbed into their trench.

In brief: a demanding read but well worth the effort.

Derrick said…
Nice review! I found Cunningham's book fascinating and in my humble opinion the best offering of the kind out there, glad to see its making its paces with more people!
30 April 2012 at 23:44

Terry Wright said…
I'm not inclined to read the book - too many other things to read! - but I remember seeing Cunningham's BBC documentary on this a couple of years ago and being very impressed.
1 May 2012 at 09:14

Biologists are called biologists, not darwinists.

Evolution is the scientific explanation for the development of new species. That's all it is, nothing else.

Evolution has the advantage of being the strongest fact of science.

One more thing. Theology is a bunch of words about nothing.

Nance said…
Human Ape, I'm not sure what your post was meant to accomplish... Everything makes pretty good sense until the end. I take it you've read Cunningham (not to mention the Bible, the great theologians of the Christian tradition, and all the modern cross-disciplinary voices writing on the topic) and have a detailed, coherent, and informed rationale for your claim/rebuttal of the relevant arguments?

Thanks for the review, Robin. When the topic came up recently in a class discussion on David Bentley Hart's Atheist Delusions--another gem for put-downs--Stanley Hauerwas also recommended Cunningham's as the the best book on the topic of Christianity and Darwinism. That's two good recommendations now; I'll have to check it out.
4 May 2012 at 18:16

Thanks for taking the time to leave some comments.

I am afraid that Nance is correct. Your comments are fine to start with, though they say nothing that contradicts anything in my post. If anything, they support it.

Things start to go wrong with "evolution has the advantage of being the strongest fact of science." Now I do believe in evolution (as you will have gathered from my post) but I fear that your claim is too strong. Indeed, it is simply in error.

But things really come apart at the end (the bit about theology). Your claim is no more than an undefended assertion unrelated to anything else you have said. So there is no argument to respond to. So I will simply invite you to make a case in defence of your claim and then we may have something to talk about.

I have also been told that DBH's book is good. Guess that I'll need to check it out too.

Human Ape said…
You wrote Things start to go wrong with "evolution has the advantage of being the strongest fact of science."

Send your complaint to the best encyclopedia in the world.

"There is probably no other notion in any field of science that has been as extensively tested and as thoroughly corroborated as the evolutionary origin of living organisms."
-- Encyclopedia Britannica

You also wrote "But things really come apart at the end (the bit about theology)."

What would happen if every theologist in the world dropped dead today? Do you seriously think anyone would notice? There is no profession more worthless.

Theologians contribute nothing to human progress. They just get in the way with their childish excuses to justify their idiotic evidence-free fantasies.

From another comment: "the great theologians of the Christian tradition"

What a joke. The great theologians of the Magic Jeebus Man tradition. How worthless can a person get?
5 May 2012 at 21:52

So who exactly is Jesus? It sounds like you may have already figured that out. If so then you are no doubt a theologian youself.
5 May 2012 at 23:09

So who exactly is Jesus? It sounds like you may have already figured that out. If so then you are no doubt a theologian yourself.
5 May 2012 at 23:14

It looks like I ought to complain to the Encyclopedia Britannica because they are mistaken. (Silly British intellectuals!).

But please do not misunderstand me: I DO believe in evolution; I have no quibbles with your faith in evolution. It is well placed. We are on the same team as far as that goes.

So, contrary to the claims on your website, evolution does not kill God. It only kills a God of the gaps (and even that is arguable) but that is not the God of traditional Christianity.

Then your comment degenerates into mere insult without no argument so I am not sure how to respond to that.

Obviously you don't think that theology contributes anything to the project of human knowledge. Fair enough. But that is simply because you are an atheist so of course you are going to think that. If there is no God (as you believe) then those who make claims about God (what God is like, etc.) are obviously mistaken.

So you have not really offered any thoughts of substance. You simply offer an insult based upon an undefended assumption.

You are very entitled to offer such comments (they are fun to read) but I fear that they offer little to take any intelligent discussion further forward.
7 May 2012 at 17:49

Human Ape said…
"I DO believe in evolution; I have no quibbles with your faith in evolution."

Since when did basic scientific facts require faith? Would you say you have faith in gravity? I hope not.

I noticed you theologians, after writing several million boring words about your magic jeebus man, have never once provided any evidence for your childish god fantasy. You have nothing but your wild guessing and wishful thinking. Have fun wasting your life in the Dark Ages.
11 June 2012 at 13:53

Yet again your comments are simply based on misinformation.

You seem determined to attack a straw-man version of Christian theology rather than the real thing. That is not "enlightened"; it is ignorant.

If you find such a strategy psychologically helpful (making you feel better about your own beliefs) then please be my guest.

Once you take a little time to discover what mainstream Christian theologians (as opposed to the fundamentalists you have in mind) actually say and show how THAT is mistaken then I will engage your arguments.

In the meantime you offer nothing to comment on except misinformed insults.