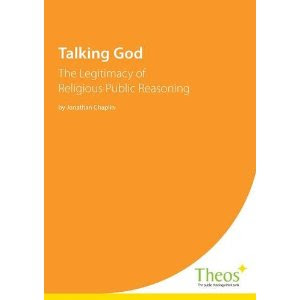 The hot issue at the heart of the book is the place of religious reasons used as justifications for proposed laws and policies in public debate.

There are an increasing number of very vocal opinion-shapers who are of the opinion that to allow such "justifications" would be to abandon secular democracy and to start rolling back towards some kind of theocracy. Chaplin's goal is to gently take the case for such a view apart.

Chapter 1 examines the meaning of "secular democracy". He contrasts two visions of secular democracy:
(a) programmatic secularism (of which liberal secularism is a species). This approach seeks to impose secularsism on the public realm and to relegate religion to the private sphere.
(b) Procedural secularism (of which Christian secularism — Chaplin's own view — is a species). This approach seeks a posture of neutrality and impartiality towards rival faith perspectives in public life. So the public sphere in a pluralist society is indeed open to religious arguments and the powers that be must protect the public space for people from differing faith-perspectives (liberal secularists included) to be able to present their cases.

In chapter 2 he argues that liberal secularism has a misplaced understanding of "equality" underpinning its view of religion in public life. It mistakenly supposes that a respect for the equal treatment of persons requires that any public reasoning must be equally "accessible" to all persons. So, for instance, anyone who uses God as part of their reason for a certain public policy has produced an argument that is not "accessible" to atheists and is therefore illegitimate in the public sphere. So society must discriminate against religious talk in the public sphere. Chaplin argues that this approach is hardly liberal and misunderstands what is required by the requirement to respect all people equally!

Finally, chapter 5 develops the answer given by Christian secularism for when religiously-grounded reaoning is (and is not) appropriate in public.

Chaplin has been shaped in his political thinking by the Dutch Reformed tradition of Abraham Kuyper and Hermann Dooyeweerd. From this perspective he (rightly) resists the notion that religious reasoning is "faith-based" whilst "secular reasoning is ... not. For Chaplin "religious" and "secular" beliefs are both equally "faith-based".

Here is my view on this book
1. very clear
2. very concise
3. very relevant
4. "on the ball" in its respectful but pretty devastating critique of liberal secularism.
5. Thought-provoking.

In a nutshell, it is classic Chaplin!

simon said…
you can download the report for free here http://www.theosthinktank.co.uk/mainnav/reports.aspx
6 October 2010 at 07:41