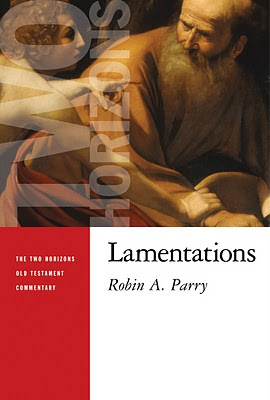 Lamentations, like the personified Lady Jerusalem within its pages, often sits alone within the landscape of the Christian Bible calling out to those readers who pass by to take notice but, as with Lady Jerusalem, there is no one to comfort. Lamentations is one of those Old Testament books that have never really attained a place of prominence in Christian spirituality and reflection. This means that when attempting to think theologically about the book one does not have the rich heritage of Christian theological interpretation to draw on that one finds with books such as Genesis, Exodus, Psalms or Isaiah. Perhaps this is to be expected because Lamentations is only twice alluded to in the New Testament while a book such as Isaiah seems omnipresent. So when one comes to read Lamentations theologically as a Christian one has to start with a comparatively slender thread of prior reflection as a guide.

When reflecting theologically on Lamentations issues of method require some comment. First of all, Lamentations was not written to present a theology. As Berlin notes, “the book does not construct a theology of its own, nor does it present in any systematic way the standard theology of its time. It assumes the ‘theology of destruction’ in which destruction and exile are punishment for sin…” So one task of the theological reader is to bring to the surface the theology underlying the text and to seek to clarify its contours.

But precisely how should Israel’s sacred texts be interpreted by this new community of Jesus? In the same way that Israel had always reinterpreted its own texts – in the light of the current thing that God was doing. For the early Jewish followers of Jesus, God had moved to do something radical in the current situation. In Jesus’ life, death, resurrection and ascension the end of the age had come and a new age had broken in. Jesus was seen as the climax (though not the end) of God’s dealings with Israel and all of Israel’s traditions and texts were re-read in the light of Christ. Christians reading Israel’s scriptures cannot read those texts as if Jesus had not come. But, and it is an important ‘but’, to allow those texts to challenge and contribute to ongoing Christian reflection there is a critical place for seeking to hear them on their own terms. In other words, part of a Christian theological reflection on Lamentations will require the Christian reader to listen for the text’s distinctive, pre-Christian voice. The danger of only considering Old Testament texts in the light of Christ is that all one hears is what one already knows from the New Testament. But the Old Testament has much to teach Christians that they will not find in the New, often because the New took it for granted but then the later church forgot it. However, for the Christian, once one has heard the distinctive voice of Lamentations one has to bring that voice into dialogue with God’s revelation in Christ to discern how God is addressing the Church through it. This is an art, not a science. So our aim in the first part of the commentary is to hear the distinctive theological voice of Lamentations but, in the second part, it is to hear how the acoustics change when that voice is heard in the Cathedral of Christ.

It ought to be said clearly that that there will never be such a things as the Christian interpretation of Lamentations. This is because the meanings to which it gives birth are not so much ‘in the text’ as born out of the interaction of the text and the (hopefully) Spirit-led activity of its readers. Christian readers will be mixing the genes of Lamentations with the genes of other biblical texts, Christian theological reflections through the ages, the experiences of various readers and so on. The book is simply so pregnant with potential that the meanings to which it gives birth will be diverse even within the constraints imposed by canonical context, the Rule of Faith and the history of Christian interpretation.

Anonymous said…
You write:
" ... how should Israel’s sacred texts be interpreted by this new community of Jesus? In the same way that Israel had always reinterpreted its own texts – in the light of the current thing that God was doing."

I wonder if this is exactly the same as the reinterpretation, and further development, we see in the Book of Revelation's use of the OT:

There are two examples that really inspire me because of the way Revelation makes an OT quote even more universal.

Is 43:19
Behold I am doing a new thing (LXX Greek: idou ego poio kaina)
becomes in Rev 21:5
Behold I am making all things new (NT Greek: idou kaina poio panta)
where the addition of "all things" (panta) really universalizes it.

The other example is Ezek 47:12
... their leaves will be for healing.
becomes in Rev 22:2
the leaves of the tree were for the healing of the nations.

I think I got these examples from The Evangelical Universalist :)

Anyways, there seems to be real development afoot in Revelations. Are we called to do the same sort of "extention work" in reading Lamentations?

Well, I'll find out when I read your book, unless you want to give me a quick answer?!

"The book is simply so pregnant with potential that the meanings to which it gives birth will be diverse even within the constraints imposed by canonical context, the Rule of Faith and the history of Christian interpretation."

I won't spoil the commentary but I do think that we are called to learn from biblical writers ways to read Scripture . So I do think that "extension reading" is one of the ways we should be reading Lamentations and I think that the Rev examples you provide do illustrate that.

it's for "All Shall be Well" that these two dates appear on the W&S website:

"Street date" sounds like illegal pre-publication copies being sold at street markets around the world!

We have to put a stop to this!!

Here is what the publisher said when I asked:

"the 'street date' is the actual date that a publication goes live in our system, verses whatever official publication date that we assign to a new publication."

So you can buy it now.

Nicolas said…
Ah, right, that's when it actually hits the streets. Seems quite clear, now that it's explained!

Anonymous said…
Now these extensions in the NT are popping up all over the place:

[22] “Turn to me and be saved,
all the ends of the earth!
For I am God, and there is no other.
[23] By myself I have sworn;
from my mouth has gone out in righteousness a word that shall not return:
‘To me every knee shall bow,
every tongue shall swear allegiance.’

[24] “Only in the LORD, it shall be said of me,are righteousness and strength;
to him shall come and be ashamed
all who were incensed against him.
[25] In the LORD all the offspring of Israel shall be justified and shall glory.”

Now look at Paul's loose quotation of this passage, and the wonderful additions he makes.

cytokine said…
Did you do the translation of Lamentations that is in your commentary?
14 April 2011 at 01:41

cytokine said…
Did you do the translation of Lamentations that is in your commentary?

I was wondering which English translation of Lamentations you have read and found most accessible?
14 April 2011 at 01:43

I did do the translation. I don't have strong views on the normal English translations (I have not really looked at them for quite a while). All of them are mostly OK. My translation errs on the more literal side so some may find it wooden.