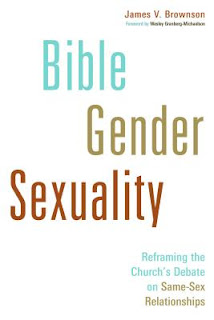 So I have just finished reading James Brownson's new book on same-sex relationships and Scripture. I have no intention of offering a detailed analysis. I simply wish to offer the back cover blurb and then to make a few comments.

In Bible, Gender, Sexuality James Brownson argues that Christians should reconsider whether or not the biblical strictures against same-sex relations as defined in the ancient world should apply to contemporary, committed same-sex relationships. Presenting two sides in the debate - "traditionalist" and "revisionist" - Brownson carefully analyses each of the seven main texts that appear to address intimate same-sex relations. In the process, he explores key concepts that inform our understanding of the biblical texts, including patriarchy, complementarity, purity and impurity, honour and shame. Central to his argument is the need to uncover the moral logic behind the biblical text. Written in order to serve and inform the ongoing debate in many denominations over the questions of homosexuality, Brownson's in-depth study will prove a useful resource for Christians who want to form a considered opinion on this important issue.

OK. Some comments. There is an AWFUL LOT that one could say about this issue and about this book. I will not.

But I will say this. The burden of proof for a change in the church's traditional attitude on this issue lies firmly with those who wish to revise it. The default stance is, as with any issue, the traditional one. And any attempt to change this position will have to do some serious biblical and theological work, taking what Scripture says very seriously but also reflecting on Christian theological loci such as creation, sin, incarnation, atonement, etc. It is not enough to complain that traditional Christians are out of touch or are unloving or
intolerant, as if that should settle the case. The traditional position is integrated into a certain way of construing Christian theology and biblical texts and unless that is taken seriously there will be no progress. And one cannot simply dismiss traditional biblical and theological teaching, because that approach is not going to help the vast majority of Christians (straight and gay) for whom this text is Holy Scripture.

So if revisionists wish to persuade the church then they need to take both Scripture and theology very seriously and make the case that certain kinds of same-sex partnerships are actually consistent with a high view of Scripture and orthodox Christian theology. That is the task.

James Brownson seeks to undertake one critical part of this task — arguing that Scripture's teaching and Christian holiness are compatible with committed, marriage-like same-sex relationships. He also engages the theological questions insofar as they relate to the biblical texts he deals with (and often they do). He is a wise theological interpreter of Scripture with an eye for biblical-theological currents. (For a short but intelligent attempt at making a more systematic theological case see C. Norman Kraus, On Being Human: Sexual Orientation and the Image of God)

(a) unlike some revisionists his exegesis is not strained but very plausible. Really — I actually learned a fair few new things (and I thought I'd read around this issue rather a lot).

(b) unlike some traditionalists he takes the hermeneutical question (in terms of theological and cultural hermeneutics) seriously. Determining what the author of Genesis or what Paul had in mind is only the first step, not the last.

So this is a very sophisticated and, thankfully, a very irenic book. Indeed, it is the best book I have read on this topic from a revisionist perspective (quite possibly from any perspective).

In summary: a very thought provoking and constructive contribution to the debate, one that those on both sides will need to seriously engage with. Highly recommended.

James Goetz said…
Thank you Robin. I am curious. Did Brownson address if any of the New Testament authors were aware of then contemporary unofficial male same-sex marriages in the Roman Empire?
18 May 2013 at 06:57

Christian said…
It interests me this post for the reason that this is even open to interpretation. If the Bible says something, who are people to doubt what their God has to say.
BTW I am an atheist, that's why I don't understand. After all I thought the Bible was divinely inspired and therefore correct.
19 May 2013 at 14:06

Robin Parry said…
James — No. (I am unaware of these. If they are unofficial are they marriages?)

Your question is philosophical while the answer is debatable. My conjecture is that unofficial marriages are marriages when the respective government will not permit the legitimatization of the marriage.

These same-sex marriages would not have been an issue among the Jews, but they were an issue among gentiles. Eventually, Constantine outlawed the same-sex marriages. I suppose that they were not legal or illegal before Constantine. My long list (as in not my short list) for research includes learning more about ancient Roman marriage laws and practices.

In the case of New Testament hermeneutics and the same-sex marriage debate, I propose that revisionists need to address why the apostolic church did not approve of the unofficial same-sex marriages. I suppose from your answer that Brownson did not address those consenting same-sex relationships in his book.

(I am hoping that somebody answers these historical questions before before I finish my short list of research.)

I see. Interesting. You'd need to email Brownson and ask him about it.

But I wonder: is there reason to think that the apostolic church would have known about unofficial same-sex marriages? Even if such things happened sometimes it does not mean that they were widely known about, especially in Jewish circles. (And, if they knew of Nero's that is unlikely have been a good recommendation!)

I guess I'd need to know a lot more about the phenomena we're talking about before I could hazzard a suggestion.
20 May 2013 at 09:36

James Goetz said…
I could see the Jerusalem church originally unaware of the committed same-sex relationships. And perhaps Nero's cases were not examples of consenting relationships. But I find it difficult to believe that Paul and other leaders in the church never heard about the committed relationships after the church expanded to major Roman cities including Rome. This issue sticks out in my mind while more historical research is needed or I at least have not yet seen the research that might have already been done.
20 May 2013 at 12:45

James Goetz said…
Here is an outline of facts that are accessible on the Internet:

F1. A few Roman authors since the first century BC had documented the phenomena of committed adult male same-sex unions. (I will document this in a subsection of my current research.)

F2. The orthodox church eventually learned about the same-sex unions and never endorsed them.

Judy Gale said…
Peter Fitch, professor at St. Stephens University and pastor of the St. Croix Vineyard, NB, Canada, has just published his personal journey of struggle with the "Gay and Christian," issue ... how he came to conclusions of inclusiveness and embracing "the other" while maintaining "the integrity of the scriptures."
https://www.createspace.com/4316067
31 July 2013 at 15:45

Anonymous said…
We also must be careful in considering the claims that these scriptures do not condemn same-sex relationships wholescale merely because we live in a day and age where same-sex unions are becoming vogue and legal. Nor should we attempt to justify them because it was vogue in ancient Roman times, when the scriptures were written.

On the other hand, if there could be reasonable grounds for contending the traditional view, then it would be worth a look, but the evidence needs to be solid. Any flimsy attempt to justify same-sex unions will be rigorously rejected in traditional circles.
12 December 2013 at 16:48