"Hell and Beyond" by Michael Phillips 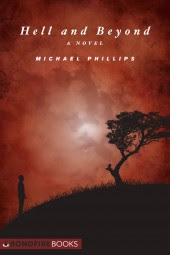 Hell and Beyond is a new fantasy e-novel about the afterlife (you can buy it here). There is a noble tradition in the West of voyages into the realm of death and the beyond — from Homer's Odyssey through Virgil's Aeneids and later Dante's Divine Comedy on to more recent works, most notably C. S. Lewis's The Great Divorce. It is in this tradition that Michael Phillips seeks to locate his fantasy. What makes it different is that it is funded by a more universalist vision than any previous explorations in the genre. I suppose you could say that it is for some forms of Christian universalism what Dante was for late medieval Catholicism. The spirit of George MacDonald and C. S. Lewis loom large over the novel (indeed the Professor and "the Scotsman" are both guides through parts of the afterlife in the book).

It is important to flag up Phillips' own disclaimer in the afterword: This work is a fantasy and NOT a speculation about what will actually happen after we die. "With Lewis, I would not hazard 'even a guess or a speculation at what may actually await us.' But one thing I am certain — God's love and eternal plans are much deeper and more wonderful than we can hope or imagine." What he aims to do is to "set forth possibilities about what may be in God's heart to accomplish in eternity, but not in any way to predict how he might work towards such ends." We are urged not to read the book as a doctrinal tract but rather as an imagination-expanding work of fiction. This is a helpful warning, although the book is inevitably theological and as such is open to theological evaluation, even if not at the level of details.

The story told is of an internationally celebrated atheistic apologist who unexpectedly dies and finds himself "on the other side" to discover that he was seriously mistaken. The tale is the difficult afterlife voyage he must undertake towards transformation. He must traverse all sorts of imaginative environments (the town of isolation, the desert of introspection, the hill of betrayal, the sea of burnished souls, the city of debt, the lake of fire) before finding wholeness in communion with the triune God.

On the whole I thought that Phillips executed his task well. It is a difficult genre to work with in the contemporary West; people find it hard to take seriously in ways previous generations would not have. But as with all works in this tradition it is as much about how we live with other people, ourselves, and God right here, right now as it is about life after death. And as a means of exploring the significance our everyday lives and everyday choices from the perspective of eternity it works rather well.

There were times when it felt a bit twee or simplistic and verged on preachy. For instance, the first companion the atheist meets on reaching the afterlife is Charles Darwin. (Darwin, along with the other guides, is not named but his identity is clear.) Darwin has renounced his godless theories and is appalled at the way they have misled millions. I must confess that this made me groan and want to give up reading (Christian anti-evolutionism is a lifelong frustration to me). But it is worth pressing on. Darwin was a blip and things pick up after that.

What I found most helpful — indeed THE great strength of the book — was that it shows in a very imaginative way how a universalist vision does take the dreadfulness of sin with full seriousness. The gospel is not about simply being forgiven — it is about being transformed and the voyage of transformation is painful. It requires acknowledging and owning what we have done and making restitution. Phillips, in the tradition of MacDonald and Lewis, is really at his best here.

For a penetrating interview with the author about the work see here.

I do not have time for that level of engagement but I do have one theological question: The book does at various points make reference to the cross but it is never explains how the cross is related to the transformation and salvation of this ex-atheist. Now I do appreciate that this is not a theology book so I appreciate that we cannot press things too far. Yet it is a book that has a lot of implicit theology and I would be interested to know what role Christ's atonement plays in the salvation envisaged here.

I was pleased to find your post on this book today. I read it a couple of months ago. It did seem both encouraging and convicting and intended to make us more conscious of our need for transformation now. As far as the question you raise at the end, maybe I am not understanding you, but our "sojourner" passes from one age to the next when he crucifies Jesus with his own hands and grasps its significance: "I knew that his death had all along been meant to be my death as well, the death of my own self into his...I began to know the magnitude of what I had done. I also knew it was
a mere beginning."
21 May 2013 at 17:54

You are correct that the cross does occur (as I mentioned) in various places but I am not clear on what role in plays in the main character's salvation.

The passage that you quote is probably relevant to that issue but I an unsure what it means. That is why I wanted clarification.
24 May 2013 at 11:31

Eric McCarty said…
I was just reading Talbott's Inescapable Love Of God -- Second Edition and came across something that speaks to your question of the role of the cross in the conversion of the ex-atheist. I am not sure if this was in his first edition or not. It may not have as yet come across your radar when you wrote this post a couple of years ago. Penny for your thoughts on this.

“According to the New Testament as a whole, God has a two-fold strategy, I want to suggest, for accomplishing this end. On the one hand, he sent his Son in the flesh to defeat, in some unexplained mystical way, the powers of darkness and to pioneer the way of salvation (see Heb 2:10)—a way of repentance, forgiveness, and personal sacrifice. On the other hand, for those who refuse to step into his ordained system of repentance, forgiveness, and personal sacrifice, he has an alternative strategy: in their estrangement from God, they will experience his love as a consuming fire; that is, as wrath, as punishment, and, in the end, as a means of correction. So in that sense, they will literally pay for their sin; and God will never—not in this age and not in the age to come—forgive (or set aside) the final payment they owe, which is voluntarily to step inside the ordained system of repentance, forgiveness, and personal sacrifice. As Jesus said, using the analogy of someone being thrown into prison, “Truly I tell you, you will never get out until you have paid the last penny” (Matt 5:25)."

I may be mistaken but it seems as though Talbott is saying there is another way to be cleansed besides the forgiveness of sin offered through the cross. God can and will burn it out of you in the age to come if you do not voluntarily step in the system of "repentance, forgiveness, and personal sacrificed" provided in the cross.
12 March 2015 at 21:19

Eric McCarty said…
I realize Phillips and Talbott are not the same person and may not agree on this point, but they are both heavily influenced by MacDonald on eschatological punishment. MacDonald's emphasis on the payment of the uttermost farthing would play into the conversation, I would imagine.

Can we please get a conference together with you, Talbott, and Phillips? I would pay the uttermost farthing to attend.
12 March 2015 at 21:27