A book title that annoyed me

I have just come across a book with a title that annoyed me somewhat: 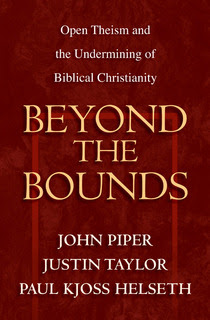 The guilty title is, as you can see, Beyond the Bounds: Open Theism and the Undermining of Biblical Christianity.

The part that sticks slightly in my throat is "biblical Christianity."

In this sense I am closer to the authors of this book than to open theists.

And as these same defenders of open theism also note, the "biblical Christianity" their critics speak of is in fact a theology developed over several centuries after the writing of Scripture. It is the Bible as read through a certain historically-shaped tradition.

At root, my problem with open theism (and open theists will LOVE this) is not that it is unbiblical (nor unevangelical) but that it is too biblical! By that I mean that it reads the Bible's presentation of God too much apart from the historic doctrine of God developed by orthodox Christianity. (Not fully apart from it because open theists are fully committed to trinitarian theology. If they were not their theology would fall outside Christian orthodoxy.)

I fully acknowledge that ancient Christian theologians drew on resources from Hellenistic philosophy in developing their doctrine but they never did so uncritically. They used such ideas to develop biblical teachings about God and they used biblical ideas to modify Hellenistic ideas. And the doctrine of God that they developed was profound.

I am not making a case for classical theism. That would be a longwinded project involving Scripture, tradition, and reason. But my point is simply that if one affirmed a radical notion of sola scriptura then open theism probably has more going for it as a "biblical view" than Reformed Calvinism (at least, if "biblical view" is conceived of in the simplistic way many evangelicals think of it).

But I do not think that Christian theology — nay, not even evangelical theology — should operate with Scripture read apart from tradition.

Of course, Scripture is the primary (though not the only) authority in Christian theology and the classical doctrine of God is open for discussion. I have no problem with open theists raising such questions and I happily affirm them as creedally orthodox and as Bible-believing evangelicals. But I believe that the basic contours of classical Christian theology are far more robust than many open theists believe and that they still tower above the alternatives.

I think that the classical tradition ought to carry a lot of weight for Christians and while it is open for debate it ought only to be abandoned because of major irresolvable problems.

That tradition offers ways to interpret the biblical texts about God that open theists appeal to. Of course, open theists are aware of this and object that we are reading the Bible through a framework imposed upon it. This is both true and false but that is a post for another day. Let's just say here that the theological framework of classical theism arose from engagement with the text of Scripture, wrestled with in the light of wider philosophical questions.

But, returning to my point, (I have got somewhat lost and tangled up in this hasty post) we need to be fair to open theists and acknowledge that we are reading those texts through a theological tradition and not simply claim to be reading them the "biblical" way.

My view, in a nutshell is this: the Bible can be interpreted in both open theistic and classical theistic ways. The debate between the two alternatives needs, of course, to engage the Bible but it will not be settled on that basis. We cannot just dismiss each other as unbiblical. Thus wider issues in the realm of Christian tradition and reason will have to play a key role.

Perhaps the issue, as I perceive it, is rooted in a more basic Protestant problem of undervaluing tradition. That too is a post for another day.

Aquinas rocks! Long live Augustine, Anselm, and everyone else with a name beginning with A ...

Alex Smith said…
Thanks, my name begins with A ;-P

Thanks for this post, I think it's helpful & balanced. I wouldn't be surprised if the authors are already working on a book titled Beyond the Bounds: Universalism and the Undermining of Biblical Christianity!
8 November 2012 at 23:14

James Goetz said…
Thank you Robin. Hmm, I suppose that Piper et al might claim that the indeterminism of Tertullian, Irenaeus, and Jerome went beyond the bounds of biblical Christianity.
9 November 2012 at 05:37

James Goetz said…
For the record, I hold that my view of conditional providence is beyond the boundaries of ancient church theology but within the boundaries of biblical theology according to the Protestant analogy of faith.
9 November 2012 at 14:02

Anonymous said…
Maybe not so much an undervaluing of theology but a lack of awareness and recognition of the impact of theological tradition on belief and biblical interpretation.

Are we convinced that theologians were critical in their incorporation of Hellenistic philosophies to theology? It seems that in the post-modern era it is only now that we are beginning to recognize the impact of context on theological work and mindsets.

I recently viewed a video on the God's Love Wins website in which you were being interviewed on your beliefs in Christian Universalism.I found your insights to be very thoughtful and helped to answer a lot of questions I have been asking for the past several years. Thank you. I am relatively new to the idea but it has been like a breath of fresh air. After reading scripture from a perspective that is heavy on God's retribution for 20+ years, I am having to rethink how I read and interpret the Bible. With that in mind, I am wondering how you read passages from the Old Testament which speak of God commanding the slaughter of people groups. Any tips on how I might approach these passages and maintain a view of a loving God?
Thanks!
13 February 2013 at 13:34

Robin Parry said…
Ah! Well those texts are probably the most difficult in the whole Bible. I do not have an answer that I am happy with but I did find Douglas Earl's book "The Joshua Delusion?" helpful. It is quite a radical solution but it operates within a view of the divine inspiration of the Bible.
13 February 2013 at 13:41

Anonymous said…
Thanks for your quick reply! I will have to take a look at the book.

Is there any way that one could say that the Israelites' view of God was very dark (just as Jesus said and proved it to be when He came to reveal God)--that their view of God's nature caused them to misinterpret His command? I am no theologian, so I have no idea how that falls outside of correct interpretation--but again, Jesus pretty much showed us that the Israelites missed so much when it came to understanding who God truly is.
13 February 2013 at 13:49

Robin Parry said…
Well, that is not an uncommon approach but I am not happy about it. If the biblical visions of God are wrong then where do we turn to get right ones?

However, Earl offers an approach that allows one to say that God did not command the Israelites to slaughter the Canaanites while at the same time affirming the biblical text as divine Scripture. Honest. Check it out.
13 February 2013 at 13:55