I loved the Olympic opening ceremony — it was eccentric but it was entertaining and spectacular.

I was disappointed in the closing ceremony — it was eccentric ... Perhaps that's just me so I'll say no more about it (and I did think The Who were good).

But what really struck me as a choice in poor taste was the focus on John Lennon's song, "Imagine."

Please do not get me wrong: I like John Lennon, I loved the way that they performed the song at the ceremony (and the 3D Lennon jigsaw was cool), and I appreciate the good heart behind the lyrics.

But ... what an inappropriate song!

You, you may say
I'm a dreamer, but I'm not the only one
I hope some day you'll join us
And the world will be as one

You, you may say
I'm a dreamer, but I'm not the only one
I hope some day you'll join us
And the world will live as one


Lennon (quite rightly) dreams of a world at peace, without conflict. He invites us to join him in this dream because if we do then that dream will become a reality.

He identifies the things that create conflict — religious beliefs, religion, countries, and possessions — and sees the road to peace as the road to the disappearance of such things.

Of course, the dream of peace in a conflict-ridden world — especially when linked to such a moving tune — is very attractive. And I am sure that this was at the forefront of the selection of the song (plus the fact that it is a famous song by an iconic British songwriter) ...

But remember that religion in one form or another has been fundamental to the lives of almost all human societies for the entirety of human history; that religion remains central in the lives of the majority of the countries represented at the Olympics and for many of the athletes.

Remember too that the dream of peace is not simply the dream of nice secularists but has been the dream of religious visionaries from various traditions throughout history. (Recall, for instance, that the statue outside the UN building about beating swords into plowshares is inspired by the vision of Isaiah.) 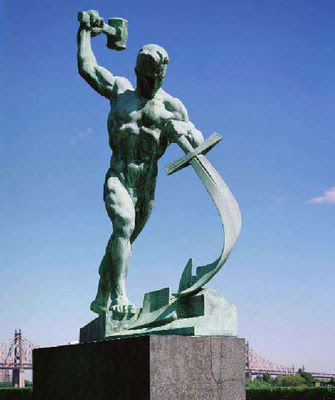 Global peace was a religious vision long before it was ever a secular one.

So here we are at the Olympic Games celebrating the vast range of countries (and diversity of religions) united together in sport and we choose to focus on a song about how global peace will come about by the dissolution of religion. Apart from the fact that it is ridiculously naive (twentieth century history is ample testimony to the fact that a world "without religion" can be profoundly violent) it is also more than a tad insulting. It is a proselytizing message — come join us and dream with me of the world without religion or religious beliefs. No thanks John.

Only someone who simply does not "get" religious faith and the roles it plays in human life — i.e., a post-Christian Brit — would think such a song appropriate. Come and be secular like me and we'll all live in peace.

It is also a strange choice for the Olympics. Imagine no countries ... Really? At the Olympic Games which are all about countries competing with each other for gold? Imagine no Team GB? But that is what is so much fun about it.

Now nobody is denying that possessions, religion, and countries can lead to conflict. However, the solution is not their eradication. If the Olympics show us anything it is not that we get on better without countries (or whatever) but that we can get on fine with them if we abide by certain shared rules and values; if we are "sporting" about it.

So John, I share your dream of peace, but not the secular utopia you are recommending. That fills me with horror.

Uncle Phil said…
Oh, poor you! The song is a dream for the beautiful future of humanity. If these fabulous Olympics showed us one thing, it's that the next step in our evolution will come about through the mixing of all races, genes & beliefs. Beautiful, talented & articulate Jessica Ennis proves this alone. There is in fact only one race....the human race & we don't need the crutch of religion to help us leap forward.
14 August 2012 at 19:45

IT IS BEAUTIFUL IN SOME RESPECTS — nations living in peace. I agree.

It is unbeautiful in others — no religious beliefs (i.e., no beliefs about higher purpose or meaning or a truth that is higher than I or values that transcend)

I am confused as to the reason you have for thinking what you do. What is the basis for your claim about how the next leap forward will come? It is not a scientific prediction so ... is it a religious belief? Does your religion teach it? Or was it "revealed" to you by [God? Angel? ???]? Or did you make it up because it feels right?

How, in other words, do you know that the way forward is what you suggest? Surely not simply because of Jessica Ennis!
15 August 2012 at 08:29

Jason Sexton said…
Thanks for the thoughtful reflections here, Robin. I thought also that the closing ceremonies had much more proselyting than the beautiful presentation of Britain's heritage in the opening one (including the masterful interwoven images of its faith heritage).
15 August 2012 at 10:08

Uncle Phil said…
Robin Parry
There's no valid evidence that 'higher purposes or meanings' exist anywhere other than in your imagination. Life....this is it, please enjoy!
Progress in evolution through genetic mix is however a proven scientific fact. Just witness the juxtaposition of cousins marrying in Bradford.
16 August 2012 at 11:16

Anonymous said…
Thank you Mr. Lennon, but I'll do my best to remain in a propertarian society where I freely choose to worship my creator.

Sally D said…
Agreed, Robin. Very inappropriate to use this song. The entire Games, It was obvious that for many athletes both God and country matter a lot. They knelt, they crossed themselves. They struggled for the right to compete wearing acceptable clothing, they wrote eloquent descriptions of lives of faith and the inspiration they draw from faith.

I love Imagine despite its limitations. But so much of that ceremony came over as tired, reliving the past and, frankly, decadent. If the object is to give the guests a great party, why not try to make it easier on them? Jessie J was an embarrassment, trying to look naked and what about those supermodels, just as everyone was saying how great it was to see females being celebrated for what they can do and appreciated in their natural diversity of shapes and sizes.

Anyway, I will not go on. It was a wonderful Olympics and Britain deserves to be very proud of what was achieved.
19 August 2012 at 22:34

Rev. Daniel McLain Hixon said…
I also thought the song was inappropriate - for an event that is about people from different countries, different creeds, different races all coming together in a spirit of sportsmanship, it is downright contradictory to spread the message that it is actually the stripping away of these identity-forming qualities that makes for peace. John's song has behind it a kind of totalitarian vision: if only everyone will look and think just like me, then we'll all get along. If only the peoples of the world will put aside their silly cultures, beliefs, and ethnic and national identities, then they can all get along "as one" - one with a rich, secularist white guy. That message is surely contrary to the very meaning of the olympics.
23 August 2012 at 02:53

Anonymous said…
My Dad was a humanist and despite my efforts he died one too. He imagined there was no heaven too and often still wondered: "what is it all about". A shame, as , just because someone imagines something doesn't exist doesn't mean that it objectively doesn't really exist.

It is a matter of faith and, despite my lack of faith the size of a mustard seed, I know the almighty hasn't given up on me yet! Peaceful world yes, but that will only happen after Jesus returns and after the man of sin is revelaed fairly soon.

I do feel for the humanist, like my dad, who lived a good life and wasn't a great Father, but wasn't too bad either. Living a good life isn't enough.....salvation is a gift that we are given and there is a heaven and a new Earth......in the world that is to come.

John Lennon nicked mmost of the lyrics to imagine from Yoko's book grapefruit!
Andy
27 August 2012 at 20:29