David Konstan has kindly given permission for me to post a short paper that he and Ilaria Ramelli offered at the SBL International in 2006. The paper (which I shall post in six parts) summarizes their conclusions on the Greek words aiônios and aïdios.

The full research is set out in their book Terms for Eternity: aiônios and aïdios in Classical and Christian Texts. Piscataway, NJ: Gorgias Press, 2007.

Terms for Eternity: Aiônios and aïdios in Classical and Christian Texts

In the brief time we have today, we offer a summary of the research we are undertaking into the uses of two ancient Greek terms that are commonly translated as “eternal.” The terms are aiônios and aïdios. Neither word is to be found in the Homeric epics or in the major poems of Hesiod, although the noun aiôn, from which aiônios derives, is very common, mainly in the sense of a “life” or “lifetime.” Aïdios enters into Greek sooner, whereas aiônios first occurs, surprisingly enough, in Plato. Plato’s introduction of the term is philosophically significant, as is the fact that Aristotle eschewed it completely in his own copious writings. 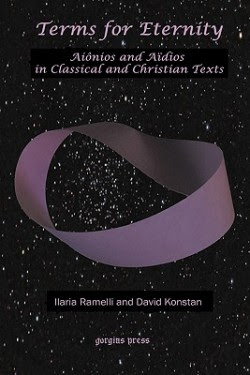 The subsequent history of these terms, and the dance in which they engage with each other throughout Greek literature and philosophy, is fascinating in itself, but the real pay-off is in the way they are employed in the Septuagint and the New Testament, and thereafter in Christian writers who are usually equally familiar with their connotations both in the pagan tradition and in Scripture. What is more, a great deal proves to be at stake in how these two terms are interpreted: in fact, nothing less than the prospect of the eternal damnation of sinners versus the universal salvation of all. Thus, what may seem to be a dry investigation of subtle terminological distinctions proves to be a key to understanding ancient philosophical and religious thought.