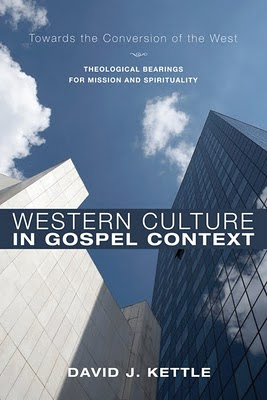 A book to look out for in the next few months will be David Kettle's Western Culture in Gospel Context: Towards the Conversion of the West: Theological Bearings for Mission and Spirituality (Eugene: Cascade Books, forthcoming).

It is a very wide-ranging and thought-provoking analysis of Western culture in the light of the gospel and a call to "conversion".

David is the network coordinator for "The Gospel in our Culture" (http://gospel-culture.org.uk/) and this book is the culmination of a lifetime of theological reflection.

Here is a brief section on leaving flowers at the sites of road traffic accidents.

[T]he placing of memorials at the site of road traffic accidents is now not uncommon. Here, once again, elements of continuity with traditional Christian mourning are found in such things as flowers and candles but there are highly significant discontinuities in meaning. On the one hand, these gestures assert the worth of what has been lost. On the other hand, they defer to the tragic event as the brute setting of this assertion rather than any traditional religious memorial setting. Lying in sharp disjunction from their bleak public setting, roadside tributes at the scene of accidents speak of tragic violence done to a “private” life. Unlike the traditional grave clustered among others around the building where a faithful God is worshipped, such tokens tend to intimate—in a certain gesture of impossible defiance—that violation has had the last word. Where memorabilia are made into a permanent shrine, they linger as marks of a tragedy never to be forgotten, rather than of a life lived and now remembered as a gift from God. Gifts of teddy bears in memory of a lost child are enactments of futile giving, intimating unresolved feelings of powerlessness in face of tragedy. The gestures over the death of the Princess of Wales testified to a tragedy claiming the last word upon one already seen as a tragic victim.