Richard of Saint Victor, On the Trinity 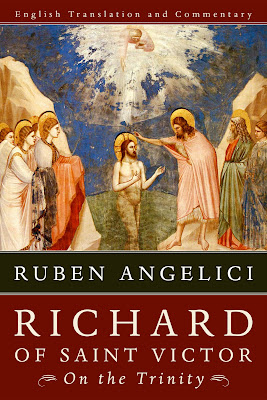 OK—here is advance warning of a classic theology text available in English for the first time . . . ever! Richard of Saint Victor, twelfth century Christian mystic, was the author of a book that influenced the shape of the western trinitarian tradition for hundreds of years. That book was De Trinitate. It stands as a masterly example of the theological method of the period and remains a classic. Sadly, only parts of it have ever been translated into English . . . until now. This forthcoming Cascade volume presents 1. an introduction Richard and to De Trinitate 2. a commentary on the argument (accompanied by very helpful charts plotting the shape of the argument) 3. a full translation of the Latin text. Richard stands within the Augustinian tradition but works as a creative thinker within that tradition. He deserves a lot more attention than he has received so I hope that this volume will play a role in stimulating a mini-revival of interest in him. It should be available in a couple of months. Keep your eyes peeled.