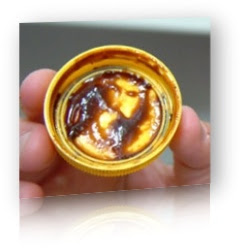 A family's breakfast turned into a religious experience when they spotted what they believe is the face of Jesus in a jar of Marmite.

Claire Allen, 36, was the first to notice the image, on the underside of the lid, as she was putting the yeast spread on her son's toast.
And husband Gareth, 37, said he could not believe his eyes when she showed him.
Mr Allen, of Ystrad, Rhondda, south Wales, said: "Claire saw it first and called her dad to come and take a photo of it.
"When I first looked at it I wasn't sure, but when I moved it away from me it started coming out. I thought Christ, yeah, she's right - that's the image of Jesus.
"The kids are still eating it, but we kept the lid."
Mrs Allen said her 14-year-old son Jamie had also remarked on the likeness.
She told the South Wales Echo: "Straight away Jamie said 'that looks like God', and my other boys (Robbie, four, and Tomas, 11) even said they could see a face.
"People might think I'm nuts, but I like to think it's Jesus looking out for us.
"We've had a tough couple of months; my mum's been really ill and it's comforting to think that if he is there, he's watching over us."