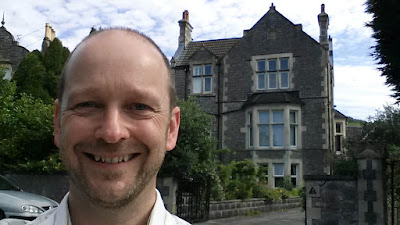 I popped into Weston-super-Mare this morning (on the way home from Glastonbury) to see the house in which Rev. Thomas Allin lived from 1877 until about 1901. It is, as you can see, a pretty snazzy pad.


But who is Thomas Allin and why should I care about his house?

Thomas Allin (1838–1909) was an Irish Anglican priest, a botanist, and a patristics scholar. But he is best known for his staunch defence of universal salvation, entitled Universalism Asserted (first published in 1885 and then going through nine editions by 1905). It is regarded by many Christian universalists as a classic.

In my opinion it is a very Anglican book. What Allin seeks to demonstrate is that reason, tradition, and Scripture —the famous three-legged stool — all converge in support of the claim that none will be forever lost. What is perhaps most distinctive about Allin's book is the detailed attention it pays to patristic literature. It was not the first study of universalism in the early church, but it is possibly the first detailed study of that topic.

In spite of being 130 years old, it remains of continuing value. That's why the guy interests me—a fellow Anglican universalist is a soul I share something with. 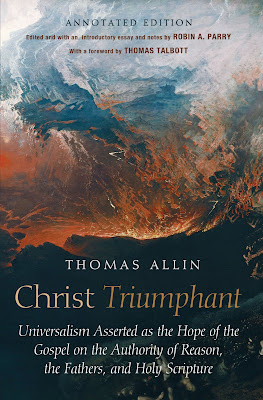 I decided that it would be worth giving Allin's classic text a new lease of life, so I have created a new edition, all beautifully typeset and with a snazzy cover (and based on the ninth and final edition by Allin). In addition, this new version of the book contains:

So it is, I think, the most useful edition of Allin's work available—and certainly the nicest to read.

Well, the good news is that the book is now available (under the title Christ Triumphant).
It is 406 pages long and is published by Wipf & Stock (2015).

Amazon.com are selling it at full price here. They do not yet have the kindle version, but should do soon.

Amazon.co.uk seem to have the kindle edition, though not yet a print edition. (Weird—the exact opposite of Amazon.com) This is a mere £6.42 and can be found here. However, be warned that with the kindle version the annotations in the footnotes will be a bit of a pain to access. Still, you'll get the introduction (and Thomas Talbott's foreword).

My advice is that the print edition is the best—because of the easy to access annotations—but I appreciate that if it is the main text that you are after then the kindle is just the job.

For those who are interested, the image on the front cover is a section of a painting entitled "The Great Day of His Wrath," which was painted by John Martin (1789–1854) in 1851–53. It caused something of a sensation when it was displayed. It's a massive beast of a painting. I saw it in the Tate Gallery in London when I was seventeen and it blew me away. So I am very pleased with Mike Surber's excellent cover design.

Eric McCarty said…
One of my favorite Allin quotes, as he sums up the story most Christians tell . . . "Sin, the one thing most utterly hateful in His sight, HE tolerates forever and ever, poisoning and defiling His works, and defying His power - satisfied, if in this brief life he cannot have obedience and righteousness - satisfied with endless disobedience and sin hereafter! HE appears before all creation as trying to dislodge sin, only to fail; as sending His Divine Son to save all men in order that HE may return rejected, baffled, vanquished. And so the curtain falls on the great drama of creation and redemption, presenting such a picture as this - a baffled Savior, a victorious Devil, a ruined creation, sin triumphant - and so to continue forever - a heaven wholly base, a hell wholly miserable."
10 July 2015 at 20:21

Mike Crowl said…
Since you wrote your post the Kindle version is showing up as available on Amazon.com.
I came across this post via a circuitous route: a friend of mine who's now working at a seminary in Melbourne posted a note about it on Twitter. I checked out the post, and discovered it's about Universalism, a topic I've been interested in for many years. The print version is beyond my budget unfortunately, so I'll have to work with the Kindle, which I'm just about to buy...
11 July 2015 at 01:36

Greetings from across the pond!

I'd like to extend my gratitude to you for your work in espousing and defending Universal Salvation. Your writings have been pivotal in helping to restore my faith in and love for God. There is a stillness in my soul that I never had before.

I appreciate your kind words.

jmbonnett1 said…
That was something old about universalism. How about something new from David Bentley Hart posted a couple of weeks ago? Here's a lecture titled "Is Hell Forever? Universalism and Creation."

Robin Parry said…
It is an excellent lecture, one with which I am in strong sympathy.

And, bringing it back to Allin, David Bentley Hart has commented very positively to me about how Allin was a pioneer in bringing attention to the patristic material on apokatastasis. So if you like Hart you may well like Allin!

jmbonnett1 said…
Thanks Robin. As it stands, I'm currently ploughing my way through Ilaria Ramelli's massive tome on apokatastasis, then I need to make my way through Edward Fudge's writings, but I'll definitely put it on the pile! I was very pleased to see that
Bentley Hart is universalist in his sympathies, particularly given his impact on contemporary theology.

as was I. I am a fan of DBH and was thrilled to see that he affirms the salvation of all.

Ramelli's book is indeed of major significance. It'll take a wee while to read through!