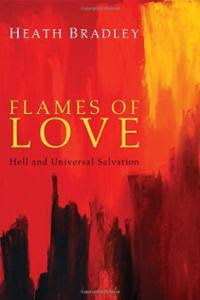 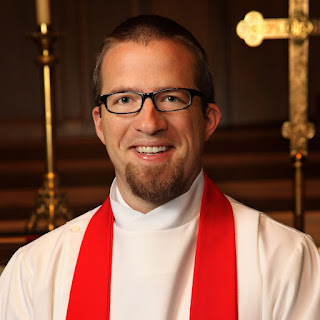 I have just finished reading Flames of Love: Hell and Universal Salvation (Eugene, OR: Wipf and Stock, 2012) by Heath Bradley, a United Methodist elder in Arkansas.

It is a very well-written defence of Christian universalism with the middle-level reader in mind. Bradley engages a set of common objections to universalism and uses them as a means of exploring what universalism does (and does not) entail, of showing why it does not fall foul of the objections, and of arguing that it actually has the advantage over the more mainstream views of hell.

After a helpful introduction in which Bradley sets out the reasons why we need to revisit the question of hell (namely, that the mainstream ideas in the tradition are deeply problematic for a whole host of reasons) he considers are the following objections to universalism:

With a gracious manner, an engaging writing style, and clear thinking he makes a good case for his conclusions.

I especially appreciated his generous and sympathetic treatment of religious pluralism (a view that he argues is deeply mistaken). I would have been more inclined to blast it but I felt corrected by Bradley's gentler, though uncompromising, engagement with it.

I also really breathed a sigh of relief at his recognition of just how limited and hemmed in our freedom really is. It seems to me that theologians often seem to work with some idealized notion of human freedom that does not take seriously enough the experienced reality of our freedom and its limits. (Echoes of Marilyn Adams on this same issue.)

I did not agree with everything in the book. For instance, I do not think that Bradley is correct to claim that universalism must be inclusivist rather than exclusivist. In part his conclusion on this matter is based on too narrow an understanding of what exclusivism is. To my mind exclusivism is simply the view that one must explicitly place one's faith in Christ to be saved. That view is compatible with universalism. But Bradley understands exclusivism to also include the claim that one must place one's faith in Christ before death in order to be saved. Obviously that view does exclude universalism. But I see no reason why an exclusivist HAS to add the "before death" qualification (even if, in practice, most do).

This is not to say that I am an exclusivist — in fact, I am very sympathetic to inclusivism (though open to the possibility of exclsivism) — merely that I think one could be an exclusivist and a universalist.

But that was a minor issue.

Micah said…
Any idea when the Kindle version of this book will be available? I keep checking Amazon. :) I should probably just order the paper copy, but keep thinking -- as soon as I do that Wipf and Stock will probably release the ebook.
24 July 2013 at 05:57

Micah said…
Thanks, Robin -- read the Kindle edition over the weekend and appreciated it very much. That point about universalists being necessarily inclusivists was one I questioned as well.

After his discussion about what 'everlasting' or 'eternal' means in the context of 'aionios', being better translated 'pertaining to the age of' (which I first learned about in your book, by the way), I was wondering if he was going to stress that even if you assume that 'eternal' is the proper meaning, that still doesn't negate the possibility of universalism. Seemed like he instead went the route of saying that it might just be hyperbole.

Is it a valid approach to say that even if those in hell receive a literal eternal sentence, He Who holds the keys to hell still has the authority to commute the eternal sentence if someone truly seeks Him through repentance? It seems then that universalism is still a live option even without relying on the 'aionios' or hyperbole arguments. Those who are not believers are already in an eternal sentence, in that if they never turn away from the unpardonable sin of unrepentance, their sentence would go on indefinitely. But when the inner change occurs, that sentence is commuted?

I see nothing incoherent in the idea of hell at eternal torment, sinners as sentenced to that fate, but subsequently redeemed from hell in Christ. I think that a theological account like that could be fleshed out quite easily.

My problem is that this view of hell is hard to square with divine justice. However, if it turned out to be the sober truth you are correct that it is compatible with universalism.

Micah said…
Yeah, I share your concerns about what this would say about the nature of divine justice. I noticed, though, when I first discussed my being drawn to universalism, with family, they would seem hesitant to accept the 'aionios' = 'of the age to come' interpretation but somehow seemed receptive or less rejecting of the idea that 'He Who holds the keys still has the authority to commute'. So despite their voicing grave concerns that I was going astray on many of the points, this one seemed to give them pause, in wondering if maybe we could be hopeful that the 'end of the story' is really good.

Probably a whole rabbit trail, but wondering about free will allowing rising from hell to reconciliation vs us having free will in heaven but not ever falling again. Is it maybe correct to think that we perhaps could choose to sin again (our free will is still there), but that we perfectly never would? Ability vs overriding perfect will? Is this one of the areas that Origen 'got into trouble' with the council?
15 August 2013 at 15:54

Robin Parry said…
On freewill I defer to Tom Talbott and Eric Reitan. The concept of freewill is actually very difficult and I have never come to a clear and fixed view on it. But I do not think we will sin in the age to come. Whether that is because it is impossible ... ask Tom and Eric
15 August 2013 at 18:12

You responded to Micah:

"I see nothing incoherent in the idea of hell at eternal torment, sinners as sentenced to that fate, but subsequently redeemed from hell in Christ. I think that a theological account like that could be fleshed out quite easily.

Has anyone of scholarly repute in the universalist community attempted to flesh out this particular angle?

Without taking up too much of your time, generally speaking, how do you think it could be fleshed out?

I don't know anyone today who argues for this view, though James Relly and John Murray (if memory serves me right) taught something like it. They thought hell was ECT but that Jesus had suffered that fate for all so none will face it. That is not quite what I was suggesting but it is a version of universalism with hell as ECT.

I do not really have time to flesh it out but one could argue that hell is ECT and anyone in hell would be there forever. However, Christ has faced that fate for us and exhausted its power so anyone who is united to Christ has already faced that experience in Christ and come out of the other side (in Christ). Thus, those in hell who are united to Christ participate in his resurrection life and cannot remain in hell.

Anonymous said…
Thanks Robin. So, as Micah alluded to, would the legal precedent of 'commuting a sentence' be a good analogy then? In other words, the intent of the original sentence (ECT)stands, but the proper legal authority (Christ) can commute such a sentence?

Even the Catholic Encyclopedia states, "..it is no rejection of Catholic dogma to suppose that God might at times, by way of exception, liberate a soul from hell." And the Eastern Orthodox say a prayer for those in hell on the eve of Pentecost.

Also, considering that the majority of the early church fathers in the East believed that Christ extended the offer of salvation to everyone in Hell/Hades (as documented by Bishop Alfeyev) between His death and resurrection, and that at least some repented, believed, and were taken to Heaven, don't we have a fairly well-established historical and theological precedent for believing that Christ could 'harrow hell' once again?
4 November 2013 at 17:22