In "Defence" of Dawkins 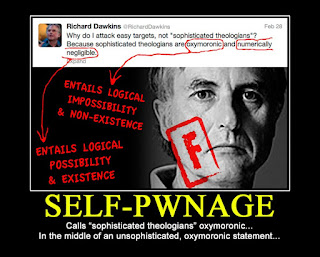 I don't like this poster. It mocks Dawkins in a rather cheap way.

Who of us has not made a comment that contained a logical problem? Most of us do it all the time. But we would not want people to mock us and to reject our ideas out of hand because of such offhand remarks.

I understand why people swipe at Dawkins. He can be infuriating, but if we claim to be better than that we should not treat him the way in which he treats believers in God.

Now there are indeed MAJOR problems with Dawkins' philosophy (see Conor Cunningham's excellent critique in Darwin's Pious Idea, for instance) but we can only get at them by taking the whole of what he says on the subject and taking it seriously. When we do that we are at liberty to pull his philosophy limb from limb, but even then we must do so respecting him as a creature of God, created in God's image. (I am preaching to myself here.)

If we treat him as a buffoon, which he most certainly is not, then we not only demean him but we also demean ourselves.

Peter Stone said…
I agree with your comment that we must respect people as children of God. Although the Psalmist did say that a fool says in his heart there is no God. So by essence if we take that to its logical conclusion because dawkins major premise is that there is no God then according to the Psalmist Dawkin must in turn actually be a fool.
4 March 2013 at 16:51

And I have no problem with the rigorous dissection of Dawkins' arguments and exposing folly where it is found. But this can only be done if we take the time to consider the shape of the whole of what he has to say. Mocking dismissals on the basis of a tweet of trivial significance are what I am objecting to.

What, I am wondering, is the goal of such mockery? Is it to persuade Dawkins of the error of his ways? Is it to persuade atheists or agnostics of the error of his ways? But a sneering retort to a tweet is unlikely to have those effects. So why do it? I can only suppose that we do so because it makes us feel better about ourselves. There may be some merit in that but probably only in private conversation rather than published for the world online.