Church Times review of "All Shall Be Well"

Here is the review of "All Shall Be Well" from the Church Times (one of the two main Church of England newspapers in the UK). It was published on March 2, 2012. 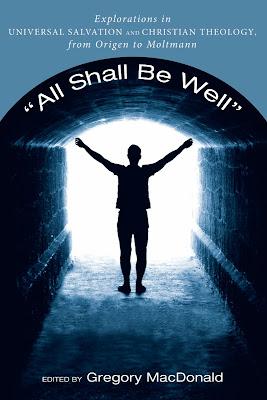 It's a very encouraging review.

THIS book suggests a winning format: find an angle on a particular Christian doctrine that is both well defined and of obvious importance; pick a dozen or so theologians, stretching from the Early Church to the present century, who have had something important to say on the matter; find an equal number of contemporary experts on these figures, who know how to write; assemble the contributions, add an introduction, and publish. The topic in view is universalism, which is to say, whether all people will be saved. The clarity of the question is part of the secret of the book’s success.

The majority of the figures under discussion are Protestants. (Roman Catholics have less room to man­oeuvre on this question, although Hans Urs von Balthasar found some.) The most familiar names will be Friedrich Schleiermacher, George MacDonald, P. T. Forsyth, Karl Barth, John Hick, and Jürgen Moltmann. Alongside them are some less well known names from the 17th to the 20th centuries, two Fathers (Origen and Gregory of Nyssa), a medieval (Julian of Norwich), a Russian Ortho­dox (Sergius Bulgakov), a 20th-century Roman Catholic (Balthasar), and an Anglican (John Robinson, in an early, pre-Honest to God mood).

Some of these figures will be familiar, and some will be new. I was delighted to be introduced to the writings on salvation of two Cambridge Platonists, Peter Sterry and Jeremiah Wright. I will certainly also search out works by the 18th-century Methodist James Relly, and return with enthusiasm to George MacDonald.

The essays are more or less evenly split between newly composed essays and adapted work. The stand­ard of writing is uniformly high. Many of the authors under discus­sion set an example of thoughtful and passionate engagement with the Bible, compared with which their detractors often seem glib.

The editor, Gregory MacDonald (or Robin Parry, as he is more usually known — I suspect that his pen name honours the Greek Father Nyssan and the aforementioned Scot), is the author of a provocative but well-received book, The Evan­gelical Universalist.

He describes the present book as an exploration of universalism rather than a defence. Although the contributing authors are, indeed, not all themselves uni­versalists, all the theologians about whom they write are; so the book is a little more of a defence than perhaps MacDonald lets on. (It may be hasty to say that they are all universalists: Schleiermacher, Barth, and Forsyth, in particular, will be argued over.)

This is a gloriously thought-provoking book, especially because of the links between its topic and many other aspects of doctrine: Bulgakov and George MacDonald have wonderful things to say about the atonement; Relly (and others) demonstrate that a high Christology aligns naturally with an all-inclusive vision of salvation; the various Calvinists show that election easily becomes universalist if we drop the “double” from “double predestina­tion” and the “limited” from “limited atonement”.

The rather generic-looking cover of this book promises little, but encloses a gem. It is set to become the standard collection on universal salvation, and will repay attention from any theologically curious reader. The bibliographies are particularly useful. Universalism should probably be the pious hope of all Christians. No one should write it off unless he or she has first read this book.

The Revd Dr Andrew Davison is tutor in doctrine at Westcott House, Cambridge.

Wow! Thanks. I am so encouraged!

My only slight qualification concerns the comment "the essays are more or less evenly split between newly composed essays and adapted work." All the essays were newly composed with one exception (the chapter on Relly). I imagine that what the reviewer had in mind was that some of the essays represented condensations of research done for other projects (e.g., PhDs). So they were, in that sense, "adapted work" but —and this is my minor qualification — they were also newly composed and previously unpublished.

By coincidence, I reread your very helpful introduction, yesterday in the car, while my wife was shopping!

Anonymous said…
I think the review also seems to have a protestant Freudian slip in "17th to 20th centuries" - for goodness sakes Origen and Gregory of Nyssa were fathers of the early church - 3rd and 4th century respectively!
1 May 2012 at 22:24