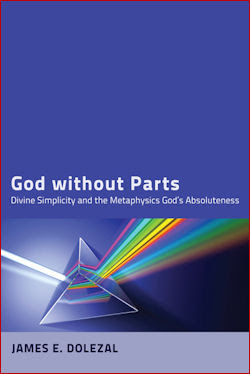 Here are the details of a new book on the doctrine of divine simplicity. It is excellent (I have read it twice and will almost certainly read it a third time).

All it lacks is a discussion of the Trinity and the author is currently writing on that issue.

Divine Simplicity and the Metaphysics of God's Absoluteness
By James E. Dolezal

The doctrine of divine simplicity has long played a crucial role in Western Christianity's understanding of God. It claimed that by denying that God is composed of parts Christians are able to account for his absolute self-sufficiency and his ultimate sufficiency as the absolute Creator of the world. If God were a composite being then something other than the Godhead itself would be required to explain or account for God. If this were the case then God would not be most absolute and would not be able to adequately know or account for himself without reference to something other than himself. This book develops these arguments by examining the implications of divine simplicity for God's existence, attributes, knowledge, and will. Along the way there is extensive interaction with older writers, such as Thomas Aquinas and the Reformed scholastics, as well as more recent philosophers and theologians. An attempt is made to answer some of the currently popular criticisms of divine simplicity and to reassert the vital importance of continuing to confess that God is without parts, even in the modern philosophical-theological milieu.

"James E. Dolezal has authored a philosophically rigorous and theologically thorough defense of divine simplicity, and he has done so for positive reasons. For Dolezal, the whole rationale for defending the simplicity of God is to assure that we actually come to know, though not fully comprehend, God as he truly is—the God of reason and revelation, the God of the Christian philosophical and theological tradition. Dolezal has made a very admirable and extremely significant contribution to the discussion of God's simplicity."
-Thomas G. Weinandy, OFM, Cap.
United States Conference of Catholic Bishops

James Goetz said…
This book sounds like fun. I don't know when I'll get to it, but I'm up for the challenge of a thoughtful argument defending that God is identical to his essence. : -)
18 February 2012 at 00:18

God, being the greatest conceivable being, is a person. But God is not only a person. Thus God is also love. And God is truth. And God is beauty.

God is timeless, but in our experience of Him/Her and in His/Her experience of us, is in time. How boring would it be for God if God were just timeless.

One should not try to push the concept of God into small boxes. Categories receive their meaning by being grounded on God, thus to try in turn to assign God into categories is kind of absurd. John Hick is I think quite right when he says that God is transcategorical.
21 February 2012 at 15:45

You are absolutely right in what you say about God being Trinity and being love and experienced by us in time.

I am not so happy about Hick though. Hick's ultimate reality — The REAL — is not trinitarian. The Trinity is a Christian myth in the phenomenal realm but the reality in the noumenal realm is radically ineffible.