The Priestly Vision of Genesis 1 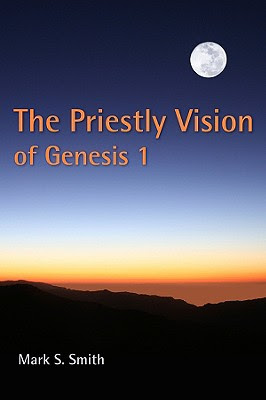 Last week I read Mark S. Smith's new book The Priestly Vision of Genesis 1 (Fortress Press, 2010). As one would expect from Mark Smith it is meticulously researched and fascinating stuff.

Smith sets Genesis 1 against three models of creation that were found in ancient Israel:
- creation as a divine victory over cosmic enemies (e.g. Pss 74:12-17; 89:11-13)
- creation as the activity of divine wisdom (e.g. Ps 104; Job 38:1-11)
- creation as a temple filled with the divine presence/holiness/light (e.g., Ps 8).
These three models were not hermetically sealed traditions and often bled into each other. Genesis 1, argues Smith, draws on insights from all three models and deploys them in a unique and innovative way.

Smith thinks that mainstream scholarship is correct to maintain that Genesis 1 was most probably a sixth century text and was almost certainly written by a priestly author. The main points that Smith seeks to argue for in the book are the following:

1. Genesis 1 does not teach creatio ex nihilo (creation out of nothing). An absolute beginning is not in view - the focus is rather on God's forming a habitable environment for life out of uninhabitable 'chaos' (described as "darkness", "waters" and "the deep" covering "the earth" - summed up as "void and vacuum"). God does this through a series of acts of separation and differentiation.

Now I do believe in creation ex nihilo (and for all I know Smith does too) but I think that Smith is right about the teaching of Genesis 1. Creatio ex nihilo goes further than Genesis 1 does. But Genesis 1 does not exhaust all that Christian theologians would want to say about creation.

3. The watery chaos from which God creates is not, as it is in other texts, a symbol of evil. It does not resist God and becomes a good habitat for sea monsters (which in Gen 1 are not cosmic enemies but simply part of creation). The waters do represent a potential for chaos but God effortlessly puts them in their place, as it were.

4. Divine speech is central to Gen 1 (and replaces the conflict motif from other traditions). Smith sees this as specifically linked to the priestly focus on divine speech as expressing divine revelation and authority - that which authorizes the role of priests in teaching and the blessing the people. The universe is presented as a temple in Gen 1 and so, Smith maintains, God is presented as the ultimate priest - speaking and blessing.

5. Smith makes a thought-provoking and plausible case for the view that the light on Day One was not part of creation but was the light of God's divine glory - the divine presence infusing creation (cf. John 1). This was a view I had previously considered a bit bonkers but, whilst I remain unpersuaded, I am now open to this view as a serious contendor.

6. Genesis 1 provides the cosmological context for the priestly worldview. The seven-day structure was utterly unique and innovative in the ancient world. It allows the priestly division of time (with the Sabbath set apart as holy) to be inscribed into the very structure of created time. Various other priestly concerns are built into creation (e.g., the categorization of fish, birds, and animals in Genesis 1 corresponds to the clean and unclean animals in Lev 11 - the distinctions that God makes in the temple of creation, the priests maintain in the Jerusalem temple. Also the sun, moon, and stars in Gen 1 are there to mark out religious festivals).

7. Humans are images of God in the temple-creation. Smith notes both the royal and the priestly backgrounds to the image of God notion but, given the book's focus on priestly concerns, I was a tad surprised that he made so little of the idea that humans are likened to cult statues (and the related idea that the High Priest functions in some ways like a cult statue in the temple). As far as I could see this idea is only indirectly alluded to in one sentence on p. 101. Perhaps Smith thinks it a mistaken suggestion (maybe the end notes will reveal this) but to my mind it is a very interesting development of the cultic theology of Gen 1.

8. The Genesis 1 creation story was written after the Genesis 2 creation story and was written as a preface to Genesis and as an implicit commentary on the Genesis 2 account, framing it in ways that made it more conducive to priestly interpretation. He explores several aspects of the Gen 1 account which seem to be deliberate references to parts of the Gen 2 account. By being placed at the start of the Bible Gen 1 becomes the master account of creation within the light of which all other creation accounts are interpreted.

I think that this approach is important theologically because it allows readers to recognize different theological traditions within the Bible (indeed, within Genesis) whilst at the same time acknowledging that the final form of the text has an integrity of its own. It also alerts us to something that is sometimes forgotten by scholars - that Genesis 2, whilst it may not have had priestly origins, was preserved and affirmed by a priestly redactor. Presumably, when suitably contextualized, it had priestly approval. This means that when constructing accounts of priestly theology (if that kind of thing takes your fancy) it is not obvious that we should filter out non-priestly texts like this.

I was a little surprised that in drawing out some of the links between Gen 1 and 2 Smith did not make any mention of the suggestion that Genesis 2 presents Eden as a temple with Adam as a priest figure (see, e.g., Gordon Wenham's article, "Sanctuary Symbolism in the Garden of Eden"). This would have fitted very well with Smith's thesis.

9. Is Genesis a myth? Of course, this depends what one means by 'myth' and there is no agreement on a definition. Smith follows an indictive route of looking at features of texts from the ancient Near East that most people agree are myth. He asks to what extent Genesis 1 is like and unlike them. His conclusion is that Genesis 1 is in many respects like other ANE myths so in one sense it is a myth. However, its placement at the head of the Pentateuch is unlike other myths in the ancient world.

In sum, a great theological guide to contemporary discussions full of insight and interest. Not the final word but a word that cannot be ignored.

James Goetz said…
Thanks, Robin. I'll get to this book when I have time to write about science and the Bible.

Anyway, I assume the priestly tradition and sixth century editing in Genesis 1, but most of the poem could have originated in the second millennium.

James Goetz said…
I want to clarify that I meant to say,

I think the claim that Genesis 1 teaches an ex-nihil creation is doubtful.

I read John Walton's 'The Lost World of Genesis 1' a couple of weeks ago. I like his approach, though I have some questions in my mind about it. I felt that he was a bit out of his depth when talking about issues to do with the relation of science and theology.

With regard to the theme of creation as a victory over cosmic enemies, I do think Genesis 1 hints at it. The author of Genesis 1 is clearly downplaying that theme, perhaps to reinforce monotheistic creation polemically, but it is likely to be in the background of the text.

Every blessing in Christ

Thx - you have been busy on the blog today! I cannot keep up with you!

Matthew Celestine said…
I did not know you had been blogging. I probably would have followed you earlier, but I had never bothered to check out the possibility you might have been blogging.

I have blogged since 2005, sometimes theologically, but I moved away from theological topics in the last two years I just got tired of endless debates with the Calvinist mob.
12 April 2010 at 19:34