Was Paul the first Christian? 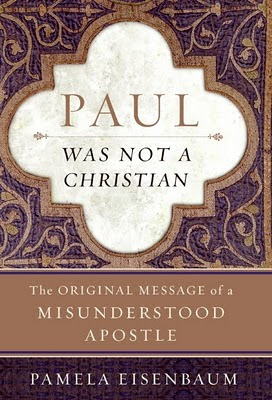 I used to get annoyed by books that called Paul the first Christian (as if Christianity did not originate in Jesus' mission! You got it - I am a traditional kind of guy). Now I also get annoyed for a different reason. Now I get (mildly) annoyed because I don't think that Paul was a Christian at all.

OK - I don't mind calling Paul a Christian if I am allowed to define the term BUT I think that the word is so loaded with associations that we are probably wiser to avoid calling Paul (or any Jesus-believers in the first generation) 'Christians'. Anachronism is almost unavoidable. And the idea of Paul as a convert from Judaism to Christianity bears almost zero relation to how Paul would have conceived of his encounter with Jesus on the road to Damascus.

So I was thrilled to see a new book by the Jewish NT scholar Pamela Eisenbaum entitled Paul Was Not a Christian. I bought it because the title was so perfect!

Eisenbaum has a good discussion of how Paul incresingly became understood as a convert to Christianity (indeed as the convert par excellence). Augustine and Luther play key 'baddie' roles here. She also has some excellent material introducing relevant aspects of Second Temple Judaism as the background against which to interpret Paul.

So - I'm looking forward to some Christmas reading. Groovy baby!

Anders Branderud said…
The first poster quoted Joh 14:6.
You wrote: “historical Paul than she suspects [and I think that the Paul of Acts was no Christian convert either]) but I wholeheartedly agree with her basic thesis: Paul did not convert from Judaism to Christianity.”

I want to examine that statement. Did Paul practise Judaism or not in the later part of his life?

Let’s analyze the doctrine of foregiveness of Paul.

How to live in order to enable the Creator in His loving kindness to provide His foregivness is outlined in Tan’’kh ( the Jewish Bible) ; and was also taught by the first century Ribi Yehoshua from Nazareth (the Mashiakh; the Messiah).

Thus, Pauls view of foregiveness is not accordance with Torah. Thus one cannot say that he practised Judaism in the later part of his life. You will find extensive logical research of Paul and the origins of Christianity in the “History museum” in the below website.

David Rudolph said…
It seems to me that Paul would have agreed with Ezekiel on this point. After all, Paul taught the importance of the mitzvot (e.g. 1 Cor 7:18 "keeping God's commandments is what counts"). In the Torah, forgiveness is linked to atonement. As you know, a standard phrase in Leviticus 4-6 is "Thus the priest shall make atonement on your behalf for the sin that you have committed, and you shall be forgiven." My sense is that this Torah concept informed Paul's understanding of forgiveness received in/through the atoning sacrifice of the Messiah (see Rom 3:25), and he sees a faith (emunah) element here - in conjunction with the commandments - that is fully consistent with Jewish life and worship. My two shekels :-)
22 December 2009 at 08:34

JF said…
Not the Jonathan Francis you were referring to?

Tell us more about Jonathan Francis the slug!!

jflyhigh6 said…
I haven't read the book but whether calvinism is true or not, Paul as far as what I see and interpret is one person for sure that if Jesus didn't intervene would most definitely be damned.
13 August 2010 at 16:28

I have to say that, in the end, Eisenbaum's case was unpersuasive. I think that she is right to question the view that Paul was a "Christian" (in the full-blown sense that we might use the term) but I found some of her exegesis unpersuasive (esp. as the book went on).

Nevertheless, there is no question about the importance of Jesus for Paul. Paul's theology is very christocentric and his view of salvation is too. For me, that is not really the issue in the debate (see some of my very early posts on Israel and salvation).
13 August 2010 at 16:33

jflyhigh6 said…
Robin, Thank you for your writings and response, I believe in penal substitution and Christus Victor, even though this is kind of off the subject a little bit but do you think they both are strong Biblical cases together or what do you lean towards? Also do you think that a lot of the american churches are wrong in not teaching Christus Victor? IDK what the main conservative teaching is in the UK? Thanks I like people who think outside the box at times here and there so if you could respond at some point that would be great, if not I'm sure you are pretty busy, thanks-john
13 August 2010 at 16:49