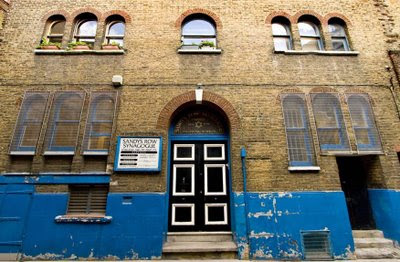 Several days ago I wrote about a sermon by an 18th C American Baptist called Elhanan Winchester.

It interests me that Winchester was in London for nearly 7 years (from Sept 1787 to July 1794). He used to preach at a chapel in Glass House Yard in the mornings and in the General Baptist church in Worship Street in the evenings. At the end of 1792 at the age of 41 he set up a congregation of Universalist Baptists at Parliament Court in Artillery Lane (off Bishopsgate).

The Parliament Court building is still there and is now a Synagogue (the oldest Ashkenazi congregation in London established in 1854). So yesterday I went to see it (and the wonderful Wesley Chapel which is just around the corner). Very interesting to see the building that Elhanan preached in. Here is a picture.

After Elhanan left his co-pastor William Vidler took over (and engaged in a series of writted debates with the wonderful Particular Baptist Andrew Fuller on universalism). Sadly Vidler later converted to Unitarianism and this divided the Parliament Court congregation.

The same story was repeated in the Philadelphia congregation. After Elhanan the church went Unitarian very fast.

Personally I think that it is a real shame that the fledgling Universalist Baptist church got side-tracked so early into heterodoxy and thereby sank itself as an orthodox Christian church. In my view, by abandoning the Trinity (albeit sincerely) they abandoned the very heart of Christian faith and were left with a mutilated version. Were the seeds of its heterodoxy inherent in its embrace of universalism or could things have gone differently? I suspect I'd need to know a lot more about the lure of Unitarianism and Socinianism in the 18th C churches to answer that question. My suspicion is that the two come apart quite easily but that some of the drives towards the one also motivated the drive towards the other.

Anonymous said…
Robin, thank you for the two posts on the universalist E Winchester. (btw the word verification here is "unieu" -- it's a sign!)
So I've read Winchester's sermon and was surprised how much of the best of modern universalism is already there back in the 18th cent.
I especially liked the way he summed up how both Calvinism and Arminianism together lead to universalism:
"One will say, with the scripture, that all things are given to Christ; the other, in conformity to the same sacred writings will maintain that all that the Father giveth him shall come to him; that he will give eternal life to as many as the Father has given him. This is our belief. We believe the truth of both those positions. None will come to Christ but those whom the Father giveth him; and he hath given him all things without exception. Thus we see that our belief is in fact the belief of all the Christian world put together".

Back in 1991, at the 4th Edinburgh Conference in Christian Dogmatics, one of the main speakers opened and closed his presentation with a warning: not to make "sweeping charges", "false charges" and "glib, self-satisfied statements" against the best presentations of Christian Universalism. As a hopeful universalist, I really appreciated that.
As to universalism leading to unitarianism ...? it would be good to have a study of exactly the historical/theological issues you mention. Many of the arguements leading to annihilationism also lead on to universalism. But the Reformation could also be said to have lead on to all kinds of everything, good and not so good.
If I understand your last sentence right, the only important point is whether there is an intrinsic theological connection between universalism and unitarianism -- and there is probably not -- with which I would agree.
Thank you for your stimulating post and having us respond!
8 July 2009 at 17:21

Thanks. Yes - I liked Winchester's extended passage on his version of universalism being no more than a combination of Calvinistic views of providence with Arminian views of universal atonement.

I was not quite as persuaded by the part that you quoted - it did not strike me as an obvious interpretation of John's gospel but I'd need to think about that.

If you liked his sermon you might like the book he published in 1788 entitled "The Universal Restoration" (that's the short title). You can read it online. Read a post-1792 version as that has a fascinating autobiographical introduction.

You might also find his eulogy sermon on the death of John Wesley (1791) very interesting. Winchester was clearly a man with a passion for evangelism.

The theologian that you mention sounds like Trevor Hart. He was right. The main problem with universalism is that it is not a single view but a range of diverse views. But many Christians have a certain (very caricatured) understanding of universalism. When they discover that someone, such as Winchester, was a universalist they put him in their 'universalist' box and assume that they know what he believed. It saves having to pay attention to the partocularity of his position. He can be dropped into the box and dismissed (usually for believing things that he emphatically did not believe).

I think that if we listened to him we might find that although we do not agree with him on everything he was no heretic but a faithful servant of Christ.
9 July 2009 at 19:39