My youngest daughter recently persuaded me to listen to Alexandra Burke's version of Leonard Cohen's song "Hallelujah" (2008 Christmas number 1 in the UK). You can watch the video here 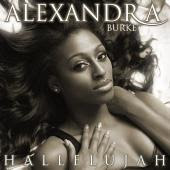 I have to say that Alexandra has a beautiful voice and does a magnificent job. In one way I think I'd even say that I prefer her version to Cohen's and Jeff Buckley's (both on youtube).

But, that said, I think I have a problem with the Burke rendition.

Perhaps I misunderstand the musical genre that her version makes use of and my hesitations reflect that ignorance, but I must say that Burke's 'Hallelujah' simply does not sound broken enough for me. The AB 'Hallelujah' sounds beautiful and, as it progresses, increasingly happy and triumphant. I could imagine the congregation in our church swaying along to the chorus with faces turned towards heaven, eyes closed, and hands raised and the occasional "Jeeee-sus" and "Thank you Lord."

This impression is certainly reinforced by the video (see link above) which is a celebration of the emotional story of AB's journey to success on the X Factor TV show. At one point in the song there is even an audio clip of the announcement of her triumph and the roar of the crowd.

The problem for me seems to be a serious disjunction between the form and the content of the song. The rendition is communicating one message and the words are communicating quite another.

Now the mismatch between form and content can be used to powerful effect. Think of the way in which some movies will present a scene of horrible violence with a calm, beautiful piece of music overlaid over the top. The effect of such unexpected juxtapositions is jarring - and deliberately so. But there is no way that anything that intelligent that is going on here.

To me it appears that those who produced this version simply liked the tune and could see just how well Alex would be able to sing it, but they were not bothered about the lyrics. In so doing they have created a song that artistically shoots itself in the foot and perhaps trivializes the profound. It is, in its own particular way, a triumph of style over substance.

The moral of this story is not new - medium and message cannot be pulled apart without miscommunication. Or, as Mr Content once said in a husky snarl, "You mess with my girl Ms Form, and you're messing with me!" What God has joined together let no one pull assunder.

Anyway, just wanted to say that i agree wholeheartedly with our comments. she might have a great voice but she renders the Cohen classic bland and dreary.

Anonymous said…
Girlfriend in a Coma is the one that stands out for me, Simon.

Anonymous said…
By George I think Robin's actually onto something about this rendition that's been bugging this X-Factor devotee for weeks. Thanks mate.